Alex Ovechkin propelled himself into the gifted 700-goal club Saturday, slapping a shot from his iconic spot near the faceoff dot past Devils goaltender Mackenzie Blackwood.

But is he? The 80s and 90s birthed many elite goal scorers; and each one of them has a unique story and argument for greatest goal scorer of all time, like Ovechkin.

One of these players is Mike Bossy. The four-time Stanley Cup champ holds the NHL record for most consecutive 50-goal seasons with nine. Mike was also the second player in NHL history to score 50 goals in 50 games, doing so in the 80-81 season. Bossy’s 0.762 goals per game during his career ranks first in league history. Overall, in only ten seasons in the NHL, he had 573 goals.

Lemieux is already a consensus top 10 player to ever play the sport, and some even think that he is better than the “Great One”. If injuries and illness didn’t hamper the 6’4″, 230 pound French man, we probably wouldn’t be having this discussion about goal scorers right now.

A player in this discussion who didn’t peak in the 80s is Bobby Hull – Hull, along with Stan Mikita, are the ones who are credited with creating the curve in the hockey stick. Hull had 303 goals in 411 games in the WHA, and 610 in 1063 games in the NHL; good for 914 goals in 1366 professional games played. Goal scoring was somewhat similar to today, with the highest goals-per-game during Hulls initial NHL stint (57-72) being 3.09 in 70-71, and the average SV% being around .910. The goals against average during Hulls first stint was around 2.80, adding to the impressiveness of Hulls goal scoring.

And the last player that deserves to be in this discussion is the speedy Mike Gartner. Mike holds the NHL record for most 3o goal seasons ever. Mike’s 708 goals rank him in the top 8, however he only ranks 22nd all time in goals per game. Mike put up 32 goals in 96-97 at 37 for the new Phoenix Coyotes.

So who is the greatest goal scorer of all time?

Ovechkin only needs 194 goals to pass Gretzky, and Ovie looks like he can go another five years in the NHL. The Great Eight also did what he has done in the era with the best goaltending ever. Plenty 80s stars in Brett Hull, Gartner, and Lemieux continued their great goal scoring into the late 90s when goal scoring dropped, proving the weak goaltending point that hampers Gretzky’s campaign less credible. Bobby Hull revolutionized goal scoring. Bossy absolutely killed the NHL in his limited time in the big leagues. And then you have the great Wayne Gretzky.

There is no wrong answer to this. You can have any of these players named as the greatest goal scorer ever. All players truly astonished all that watched them play, and in the end that’s all that matters. 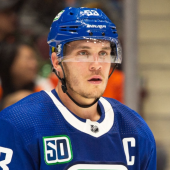 Why NY Rangers’ GM Jeff Gorton Will Have A Busy Offseason

Anders Lee is Out… So Who is the Replacement?